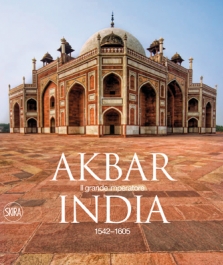 Akbar The Great is considered one of the most splendid sovereigns of mankind. Though being himself an illiterate, he was a great protector of poetry and literature, the builder of the grandiose capital Fathepur Sikri, the City of Victory, and the promoter of a new style in arts and crafts. His deep religious tolerance even brought him to attempt the creation of a syncretistic religion bringing together Islam and Hinduism. The catalogue illustrates all these aspects, covering the court life with portraits and pictures of the political activities and cultural events; describing the development of arts and crafts through paintings and objects; showing the military glory through weapons, armours, matchlocks, daggers as well as the Royal Mughal tent; enhancing the splendours through jewel boxes, turban ornaments, earrings, necklaces, etc.
The aim of the project is also to stress Akbar’s cultural as well as political achievements, and his profound religious spirit and open mind towards all religions he came in contact with.
The author references the latest in art historical scholarship, but this book is also aimed at readers who may not have specialist knowledge or extensive familiarity with Indian culture.