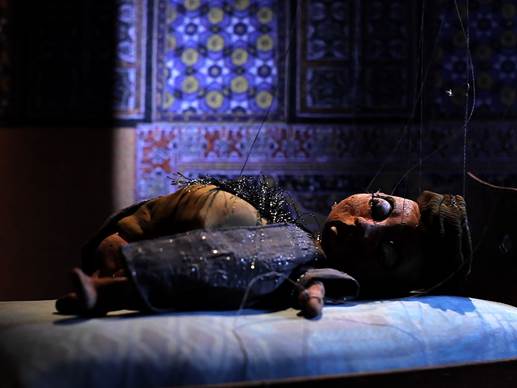 Castello di Rivoli 2016
Italian version of the catalogue by Scriptum

The retrospective devoted to Wael Shawky (Alexandria, Egypt, 1971) at the Castello di Rivoli, curated by Carolyn Christov-Bakargiev, presents a series of films, sculptures and new wooden high-reliefs inspired by the Crusades, narrated from an Arab rather than a European point of view. Based on medieval Islamic sources as well as The Crusades through Arab Eyes (1983) by the Lebanese historian Amin Maalouf, the film trilogy Cabaret Crusades explores the history of the Church’s military campaigns in the Holy Land. It begins with the first Crusades, from 1096 to 1099, which are staged in the first episode: The Horror Show File. The trilogy continues with a history of the events between 1099 and 1145, which are represented in The Path to Cairo. The third episode, The Secrets of Karbala, ends with the capture of Constantinople by the Crusaders in 1204; it also recounts the Battle of Kerbela (680), the tragic event that ultimately led to the division between Shiites and Sunnis, which still exists today. The use of marionettes instead of real actors gives the trilogy a magical quality that counterpoints the violent and macabre subject depicted. Shawky used 18th-century marionettes from the Lupi Collection in Turin for the first film; custom-made ceramic ones for the second episode, and glass marionettes from Murano for the third. From 3 November 2016 to 5 February 2017, at Castello di Rivoli.