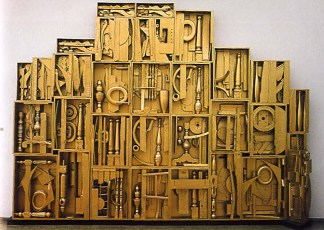 Louise Nevelson (1899-1988) was born in Kiev, Russia and immigrated to Rockland, Maine at the age of six. Following her marriage in 1920, Nevelson moved to New York City. It was during the mid-Fifties that she produced her first series of black wood landscape sculptures. Shortly thereafter, three New York City museums acquired her work: the Whitney Museum of American Art, the Brooklyn Museum and The Museum of Modern Art. In 1967, the Whitney Museum organized Nevelson’s first retrospective, and her work has been the subject of over 135 solo exhibitions.