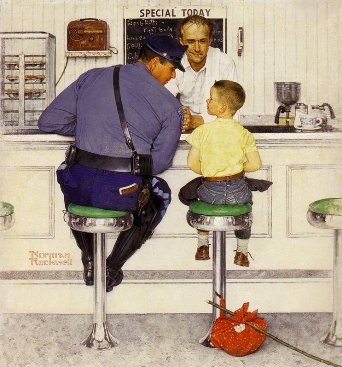 Fondazione Roma Museo – Palazzo Sciarra is hosting the exhibition ‘American Chronicles: The Art of Norman Rockwell’ from 11 November 2014 to 8 February 2015. More than one hundred works from the collection of the Norman Rockwell Museum in Stockbridge are on show for the first time ouside the United States, offering the public a complete picture of the American artist.
A keen observer of human nature and gifted storyteller, Norman Rockwell (1894-1978) described the dreams, hopes and ideals of Americans for more than fifty years. His work also reflected and influenced American behaviour and thinking in the twentieth century. The art of Norman Rockwell illustrated the Roaring Twenties, the Great Depression, World War II, the fifties and sixties, entering the homes of millions. His work realistically depicted various aspects of the average American’s life, often in a humorous vein.