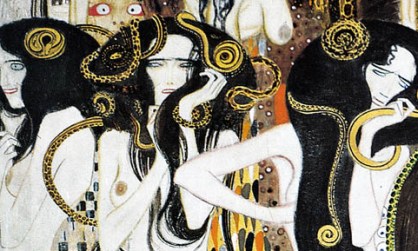 The Pinacothèque de Paris (12 February to 21 June 2015), in collaboration with Arthemisia Group and 24ORE Culture, explores one of the fundamental aspects of Art Nouveau: the Secession, which developed in early twentieth-century Vienna. The leading figure of this new artistic movement was the exuberant and talented Gustav Klimt. The exhibition traces in detail the evolution of the arts in Vienna from the late nineteenth century to early Expressionism, one of the main currents of modern art that originated from the Secession. The show features a selection of Klimt’s most important works: from the first academic studies to the masterpieces of the golden age, such as Judith I (1901) and the monumental Beethoven Frieze, presented in France for the first time as a life-size reconstruction. It continues with the masterpieces of the Secession, the Austrian avant-garde and the early works of Egon Schiele and Oskar Kokoschka, ending with a section devoted to the flowering of the applied arts in Vienna: furniture, precious jewels and beautiful ceramics.