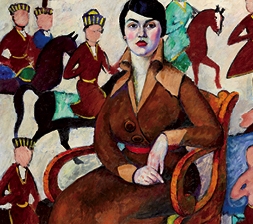 Skira 2013
English and Italian version (from Russian) by Scriptum

The rituals of Siberian shamans, the ancient funerary sculptures from the steppes seen as a crystallised presence of archaic and everlasting forms of worship, Chinese popular prints, Japanese engravings, Theosophic and Anthroposophic theories and Indian philosophy are but some of the elements that inspired the aesthetic and theoretical pursuits of the new Russian artists and writers just before the October 1917 Revolution.